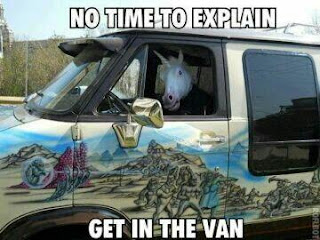 Tricksters and unicorns have been messing with me this week.*

I am pretty sure, the trickster Loki (who delights in spreading discord) was driving the camper van that caused me to switch from blissed out contentment to outraged fury and then awestruck gratitude.

All in the space of a few minutes.

Here is what happened:

On Sunday, we unexpectedly stumbled upon a negative tide at the beach. This offered an enchanting expanse of mirror like reflective sand and usually inaccessible tide pools with sea anenomies and starfish. 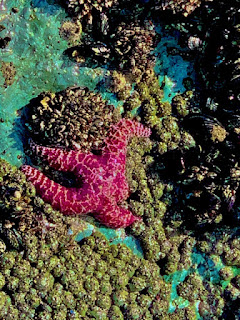 Due to the fact that none of us wanted to leave the beach, and due to my not having taking into account the fact that my sand monster/ nanny charges would somehow manage to cover their entire bodies, including scalp, ears and nostrils with sand (I usually just have to rinse my feet when I leave the beach), we were running a little bit behind schedule on our drive home.


We had only driven a short distance when we were forced to slow WAY down. Sometimes to as slow as ELEVEN MPH. With no way to pass. And the driver did not choose to use any of the pullouts-- despite the infuriated honking of the long line of cars behind the loathsome camper van.

The older of the boys (who is a stickler for rules), pointed out that this was "totally unacceptable" and was joining me in castigating the driver --who of course couldn't hear us from inside our closed car.

And then the six-year-old boy, (who remembered almost word for word what I had said on a previous occasion when the boys were complaining about slow traffic delaying our return home from an adventure), suggested that since we couldn't do anything about the situation, perhaps we should focus on the beauty of the drive and all that we were grateful for.

And suddenly, Loki's spell was broken for me.

We begin listing all the beautiful things we were going slow enough to notice and remembered all of the wonderful things that happened that day and all of our many many blessings, including how lucky we were to have each other.

And THEN, my little friend asked "How is Sparks & Leaps going?" He has never asked me this before and I have said very little about it other than to mention that there's something else I do in addition to taking care of them.

I've never been able to come up with the short, simple and clear explanation, (for kids or grownups), but I gave it a try.

I said that Sparks & Leaps is a game and that the situation with the van was a great example of how to play.

I explained that when something in life happens that you don't like, it is important to feel the mad, sad, scared feelings, (but not to feed them so that they grow bigger) AND that it's really cool if you can breathe into the feeling and activate your curiosity to see if there's a different possible story or possible gifts.

I told him that in Sparks & Leaps, this is called an ❌ spot and this is where the real magic happens.

I also described how when you can turn bad guys into allies this is a super powerful thing to do.

So we considered several possible stories about why that driver might be going so slow. And we agreed that since we really have no idea what the truth was, and there was absolutely nothing we could do to change the circumstances, it felt better to feel kindness towards that driver rather than feed stressful anger.

And what if this driver was helping all of us in the long line of cars to learn some important stuff? Kind of like Loki and other tricksters.

I don't know if what I said made a difference for them, but it sure helped me!

I love searching for hidden treasures. Sometimes they're tricky to discover, and I might not get the whole thing, but it is almost always well worth the adventure!


Wishing you a Happy Thanksgiving with many magical blessings and unexpected delights!

😕sick children yesterday
🙂very minor bug & cozy day cuddling. Movies & stories & swilling various immune system support concoctions & extra hour$
😫no nature outing/dance possible during daylight hours
😁I SAW A UNICORN on a nighttime walk/dance through town!!!
😖Still bedazzled by 🦄, I stepped off a curb into a 🕳dark hole where the street was supposed to be.
😅only minor injuries (I am well aware of how unexpected surprises can change your life in an instant) and at least I had plenty of ice for my foot, knee, back and hands since the power shut off was cancelled!
AND there were 2 more magical delights
🦄1.) I discovered there is a UNICORN METEOR STORM predicted for tomorrow night! UPDATE: Unicorn Meteor Storm did not happen after coordinating with a bunch of friends to go and view
☔️2.) there was a totally unpredicted little RAIN SHOWER last night which prompted my running out into my back yard in my jammies for an ecstatic bonus dance.
🎭What fun would it be if life was nothing but 🌞🦄? It is the contrast of the light and dark that makes life so magical 🌈 And BTW, the magic can be even more powerful with greater challenges.
👀Stay tuned for the game of Sparks & Leaps which helps players discover the evolutionary gifts in dark holes. I am SO close to finding the maddeningly elusive unicorn of the missing magic I need to finally bring Sparks & Leaps out of hiding. AND (I am reminding myself) what fun would it be if it were totally easy?!


Posted by Michelle Simonson at 5:56 PM