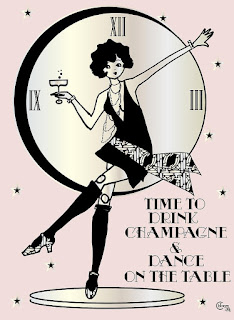 As I reluctantly realized that my desperate need for hydration trumped my also compelling need to remain unconscious so that I could avoid the pain that was waiting to assault me, I cautiously opened one eye. It was even more unpleasant than I had anticipated.

This scenario took place on multiple New Year’s mornings (or afternoons) from my younger days. It always seemed like such poor timing to expect anyone to have optimistic energy to address ambitious resolution agendas after a month long season of decadence culminating in a night of multiple wild parties.

It also seemed unfair to have been, once again, betrayed by that bubbly, magic elixir that dances so sweetly and delightfully on one's tongue, and makes one feel evermore intoxicatingly effervescent - until it doesn’t…

And yet even after I stopped having champagne hangovers, I continued to be enticed by the intoxicating promise that if I just made the right resolutions on New Year's Eve and worked just a little bit harder this time, I would feel the effervescence of sweet success at last. I would finally be “more or better” in all of the ways in which I perceived I was sorely lacking.

The etymology of “resolution” is “a breaking into parts” - - which is exactly what happened to me each time I resolutely forced myself to try to fix all of those parts of me which I believed to be unacceptable. Those "broken" parts that showed up were not on board with my shiny new plans.

Part of the reason I felt so hideous on those New Year's Day awakenings was that I had decided somewhere around Halloween that I might as well just go all out with decadence and enjoy myself while I could. I knew that the white knuckles of tightly clenched fists, the whips of strict discipline, the shit kicking, steel-toed, boots and stern deprivation with endless drudgery were waiting for me.

I danced faster and faster, like the girl in the fairytale “The Red Shoes” to my private radio station WBNE (Wrong/Bad/Not Enough) all through the holidays. And then I expected the same red shoes to magically morph into Dorothy's ruby slippers on New Year's Day. I kept hoping they would take me where I so longed to to go. I wanted to feel that sense of being safe, secure and loved that I thought would only come after I had fixed everything was unlovable about me. 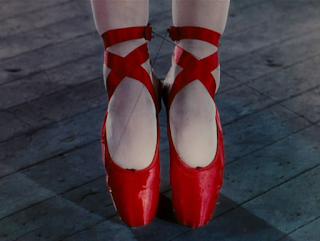 It was somewhat comforting (along the lines of misery loves company) to know that a few weeks after New Year's, despite my highly detailed plans and programs, I was not the only one succumbing to temptation. I knew there were kindred spirits failing and falling right and left. Some were lighting cigarettes with trembling hands and others were grabbing that new carton of ice cream out of the freezer, frisbee tossing the cover into the trash while side kicking the gym bag behind the couch prior to flinging themselves onto that couch -  ice cream carton with spoon already buried in it in one hand, and TV remote in the other.

There are many theories as to why this happens so predictably for so many of us. If you follow this link, which a friend of mine sent out in her newsletter as I was writing this (Thanks Jennifer Hamilton), you will find several interesting articles on the topic of failed resolutions. In these articles I found the following statistics:

45% of Americans make NY resolutions. 75% make it through the first week. 64% make it past the first month. 46% make it past 6 months and by the the next New Years, only 8% of them were able to keep them.

Six years ago at this time of year, I discovered a short book in the used section of a tiny bookstore in an anonymous little strip mall in Scottsdale with the title Working on Yourself Doesn't Work. It rocked my world - just with the blasphemous title. I had invested an enormous amount of energy into working on myself, and I had no plan B!

For my entire life or is long as I can remember, I had believed that I was deeply flawed and that the only hope for me was constant, diligent effort. I would work long and hard at whatever self improvement project seemed most necessary until the grim futility of this never ending treadmill overwhelmed me. Usually at some point I would throw myself, or allow myself to be nudged, into a downhill slide. This respite was a huge relief; until I hit whatever my threshold of "bottom" was at that time.

When I had officially failed, I offered apologies and promises to do better to which ever authority figure seemed to most displeased (usually my own inner judge) and would earnestly, with the best of intentions begin all over again - or wait until the next New Year's Day.

This exhausting process was as familiar to me as breathing and not one that I would let go without a fight, just because some book had a catchy title. I conceded that the authors of this book and many others with similar themes which I subsequently read had some legitimate points, and came up with clever ways of pretending I was not really trying to work on myself. But it was merely an iron fist in a velvet glove. This may have been (note how I am optimistically phrasing this in the past tense) my most insidious addiction.

This New Year many of the usual suspects are lining up after their recent crime spree involving rampant carb consumption and the chaos that has taken up residence in various areas of my tiny home, workspace,computer etc. But I sent the judge on an all expense paid, luxury vacation to Jamaica as a holiday gift for faithful service. I was tempted to make it a one-way ticket, but I knew she would find her way back eventually anyway and would be all the more ruthless for having been exiled. Besides, I know she does have some valuable gifts of discernment, so I'm just hoping she'll come back more relaxed with a new favorite phrase of "no problem"! Because I am not a problem to be fixed. 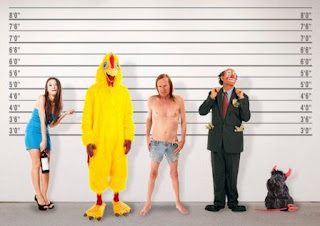 In the Babemba tribe of South Africa, when someone does something harmful, the entire tribe surrounds them in a circle for two days and reminds them what is good about them. (click to find out more about this sweet ritual). This is how I want to address my formerly scorned, scarred scofflaws and scared scapegoats (see photo of me with goat below)*.

I am not going to let my well meaning but rowdy hooligans run amok, but I am respectfully meeting with them to discuss what is and is not working well for us. These creative delinquents were born out of a genuine desire to help with my survival in this crazy culture and then the patterns became unquestioned and automatic with increasingly well grooved neural pathways.

Since these behaviors devised by younger versions of me are no longer serving me or anyone else, and I do not enjoy the consequences of my old habits, I am giving loving thanks for all of their helpful efforts on my behalf, and helping these valued team members find new jobs.

As my regular readers know, I love the concept of new beginnings and using the magic of holidays, new moons and anniversaries to set intentions for initiating change. There's something really inspiring about knowing so many other people are connected around a particular time/theme and perhaps engaging in similar activities from wherever they are in the world.

The first new Moon of 2016 is on January 2. Since I was rarely in decent shape to tackle (or be tackled by) New Year's resolutions on New Year's Day, and since my Viking ancestors were still celebrating the Pagan New Year's holiday of Hogmanay on January 2 (Thank you for the reminder this fun holiday just as I reached this paragraph, Uncle David!) I am going to use this day to try something different.

I will set some intentions of my willingness to explore how I dance with certain behaviors, from a place of open, respectful, playful, loving, curiosity rather than from fear, scarcity and rigid rules.

And I have 12 more new moons this year to recalibrate my intentions. To say nothing of 364 new dawns and 31,556,926 seconds; any one of which are excellent opportunities to make fresh starts!

By all means, toss out those cigarettes, cookies, crispy credit cards, comfy black hole of a couch, ludriciously crammed calendar, or whatever feels ready to shift for you. But  unless the strategy of New Year's resolutions has worked well for you in the past, I invite you to take the pressure off New Year's Day and join me for a year of unconditional love for all parts of you - and for all to whom you are connected that you think need to make changes.

We are all doing the best we can, so let's celebrate every baby step along the way and also have the courage to take transformational leaps when we feel the spark of inspiration to do so!

* Here is me with a goat I saw on my New Year's Eve hike. I designated him as the representitive of my imprisoned scapegoat. He tried to eat my sweater, but I gave him a little kiss anyway. I could not set him free, but I will smooch and liberate my own scapegoat. And below is my shadow in the last light of 2015 in the labyrinth his pen overlooks. 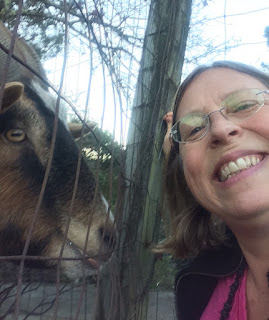 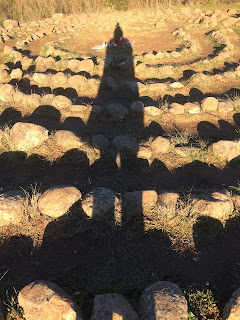 Posted by Michelle Simonson at 3:27 PM No comments: