The Yawning Jaws of the Hammock.

I crept as quietly as I could into the room where my uncle was diligently writing a paper for law school on the electric typewriter in his upstairs room of my grandparent’s home.

I had a stuffed parrot clutched in my little hand and my goal was to sneak it onto the desk without being caught. When I succeeded I was rewarded by Uncle Garry’s cry of outrage. “NO, NOT THE PING POT BIRD”, he would roar and would then grab my feathered friend and run to the top of the stairs where he would drop kick the offending bird into the living room.

I would be hot in pursuit, giggling hysterically and would run down to the living room to retrieve it. I would wait for a little while and then try again. If he heard me coming, then the game was over, so I had to wait until he was engrossed in writing again before making another attempt. The rules of this spontaneously created game were never specifically stated, but were clearly understood by both players.

Today's New Moon is right in the middle of Mardi Gras and the beginning of the Year of the Red Monkey in Chinese New Year, so I am using  this time to explore why it is a good idea to “monkey around” and also to pay homage to my most influential mentor of how to be a playful adult.

Uncle Garry drove a light blue Volkswagen beetle whose name was Scurvy. He would take me for rides careening through the alleys counting the garbage cans and belting out silly songs. My favorite was “Oh Dear What Can the Matter Be, Seven Old Ladies Locked in the Lavatory” with seven verses — including something about Miss Humphrey who couldn’t get her rump free.

He also wrote poems about Leghorn chickens that he would include every year in my birthday cards, and created many other ridiculous rituals that were vitally important in my life.

Although my frolicsome mentor knew how to play and include everyone around him in the fun; as time went on he spent much more time engaged in often highly stressful obligations related to work and family than having fun. He would often say “ah the yawning jaws of the hammock… early retirement beacons!” But no one, least of all himself, believed that would happen. And it didn't. Fortunately, he died instantly - perhaps before he hit the ground, during a rare time of recreation, outside in nature.

If I could pick how I go (the suddenly, outside playing - not the rare time of recreation part) that would be my choice too. But I wish that death had come later for him. Perhaps if he had more time to relax and play and believed that this activity was not only allowed but essential, he might still be with us and entertaining his newest grandchildren - like little Ezra pictured above whom he never got a chance to meet. At the very least he would have more deeply enjoyed the time he had here.

He made the best choices he knew how to make and I respect his dedication to hard work and his diligent commitments to being the best possible son, husband, father, grandfather, brother, uncle, friend, lawyer, etc.

In fulfilling these roles and living by the rules of what was expected of him, there was very little room left for him to be frivolous and just BE. It would be easy to blame others or circumstances beyond his control for the high level of stress he experienced that may have contributed to his early demise, but that would not bring him back.

I prefer to continue rippling his wonderful legacy of loving playfulness out to children and adults alike, and to imagine that in the heaven he (as a good Catholic) believed in, there was a hammock waiting for him. 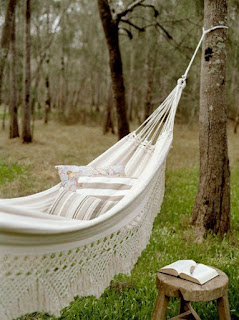 So much depends upon what we believe to be true*.

Many people believe that play is childish and frivolous, pleasure is self indulgent - or even sinful, and rest is a waste of time. Responsible adults must work very hard with limited time to relax - maybe on the weekends (after the chores, errands and social or familial obligations) and during those two weeks of vacation (if you have that luxury and allow yourself to take it). The busier and more productive you are the more admiration and approval you will receive. Working 70 hours a week and living on 5 hours of sleep makes you a tough warrior.

There is also a limited list of approved leisure activities for adults.

Another belief is that during challenging times, there is definitely no place for play or relaxation. That's when we've got to “get serious”, “keep a stiff upper lip”, “pull ourselves up by our bootstraps” , "fix the problems" and (depending on gender); to “man up” or “put on big girl panties”.

And then there is the "fact" that stress will kill us.

I am questioning all of these beliefs.

First, there's a substantial amount of research that has been done about the importance of play for children and for adults. You know when the big corporations start putting in nap rooms and play spaces, encouraging leisure and play that there is a pay off. I've written about this topic before and I will again, but for this post I will just point you towards the following two excellent resources.

If you have any doubts about why play is vital for you, watch or listen to this Ted Talk by Stuart Brown - feel free to do something “productive” at the same time if that makes you feel better.

Or if you prefer a quick read, check out this Huffington Post article by Brene Brown.

As for the approved activities, go ahead and watch The Super Bowl of other people playing a game, or that movie of other people having an adventure, or go shopping in that sterile mall, or whatever you like to do with other grown-ups, but also make time for unpredictable activities with no rules and lots of creative messy fun. Hang out with a kid if you need some ideas.

Regarding the concept that chaotic and challenging times of transition require us to get serious and work even harder, I wholeheartedly disagree. I have too much to say about this to fit it in to this post, but see my list of the benefits of celebration for some hints and stay tuned for the new Sparks & Leaps program and my upcoming book. In the meantime, the above photo speaks volumes about how to get through muddy times.

And finally, is stress really going to kill you? Only if you believe it will! After years of telling people that stress would kill them, neuroscientist Kelly McGonigal's ongoing research found that "The people that believe stress can kill die at a much higher rate. The people who are under more stress, but don’t believe or know about its “negative” effects are actually healthier and more likely to live long happy lives."  I highly recommend watching her Ted Talk.

Uncle Garry's birthday is February 10th which falls on Ash Wednesday this year. The ashes on the foreheads of Christians who participate in this ritual are reminders to "Repent and believe in the gospel " or "Remember that you are dust and to dust you shall return".  I needed to do a bit of a re-frame, to reverently and embrace this ritual.  I won't go into detail about the palm leaves, passion, miracles etc, but I would like to point out some word derivations. "Gospel" is "good spell" (spell means story)."Sin" (which is what the person wearing the ashes is supposed to repent) derives from "to miss the mark". The root word of "human" (as well as humble, humility and according to some scholars-- humor) is earth, dirt, ground or dust. In the spirit of a more relaxed and playful attitude towards how we live in our ever evolving story, I see humans as quirky, humble, and also miraculous, lovable beings, who are doing their best, but often miss the mark. It is this missing and trying over and over again that brings us closer to our Highest Selves.

*In the book Life After Death, Deepak Chopra (whom Uncle Garry relentlessly ridiculed to his mother who was a big fan), looks at the Near Death Experiences of people from all different religious backgrounds who describe what they experienced after they were pronounced dead and concludes that perhaps “who you meet in the afterlife and what you experience there reflect your present beliefs, expectations, and level of awareness. In the here and now you can shape what happens after you die.” A controversial theory that alienates both the camps of science and religion, but one I have been thinking about. A Lot.

I was experimenting with whether or not I could include a video that I created in a blog. When I was still trying to decide the direction the blog would take on the topic of play, I was toying with the idea of showing how these elephant seals I saw last month are experts of both relaxing and playing while at the same time doing the serious labor of birthing the next generation. I really wanted to bring in the theme of how rough play (demonstrated so perfectly by male seals) serves a vital purpose for humans too and is related to violence in the world. This theme has living large in my thinking lately - kind of like a loud and fishy smelling, elephant seal flipping sand around in my tiny little home, and peering over my shoulder as I write.

I had decided to ignore it and go in a different direction, especially since I couldn't get the video to play, but it absolutely refused to be deleted. I tried everything within my limited technical powers and finally gave up. So here it is, awkwardly hanging out at the bottom of my blog.  18 seconds of a sea of seals. Perhaps it will play for you if you want to see it. And perhaps not! The seals may visit again in a future post.