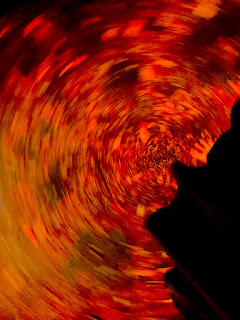 Chaos is dancing wildly in my world here in Marin County and presumably also in the larger collective as well -- although since at the moment of writing this with paper and pen, as I have been without electricity or Internet for four days, I am blissfully oblivious to all but immediate survival needs.*

Fire, dangerous wind gusts, darkness, occasional horrid smoky air when the wind shifts, and mass panicked confusion of many thousands without electricity or internet have been the spooky pre-Halloween tricks.

And the treats were stumbling upon a store giving away it's melting frozen food on the sidewalk or the Black Swan rarity of a highly coveted bag of ice. Oh and the starry night skies along with a delicious excuse to read for hours by candle light!

My original idea for a blog topic (before the additional level of chaos brought on by the blackout occurred), was to honor Maleficent.

This was not inspired by the recent movie as I chose my Halloween costume and this theme before I knew about it. I look forward to seeing it now that the movie theater is open again!

My intention was to embrace the elements of chaos that she represents for me.

The characters of Maleficent and Eris (aka Chaos) have related stories that have fascinated me for many years.

My biggest take away from their tales is that it is a really good idea to invite them them and welcome them (albeit with mindful caution and protective boundaries) because they are going to show up anyway, and it is a futile and foolish idea to attempt to shun them.


The stories of an entire kingdom put to sleep and the Trojan war --both of which were started due to invitational omissions (Maleficent for a baby christening and Eris for a wedding), are useful allegories.

Few enjoy Chaos showing up at their door in any form: whether dark fairy, goddess or some kind of nasty Life surprise.

Just about everything in our survival conditioning, neurobiology and cultural norms makes us crave that which is smooth, safe, easy and predictable. After all, if we are still alive, whatever we have done must be working --so it feels dangerous to mess with that even if we are not cozy and content.

This makes it extremely difficult to even consider a willingness to explore the evolutionary benefits of inviting Chaos. (I have written about these benefits in previous posts, so won't go into it much here).

Obviously, I am not saying I would invite the fire-breathing dragon manifestation of Maleficent anywhere near my home, because once she gets to that point she is not going to be amenable to friendly connection. The time to make her an ally is much earlier -- prior to alienating her!


I also admit I probably wouldn't be so philosophical or be making overtures of friendship to the Chaos in my life if there were actual flames at my door.

Once things are at that level of crisis, usually the only appropriate response is survival by whatever means possible. This is the time to activate that cortisol and fight or run!

What I believe the deeper message of these stories about Maleficent and Eris demonstrate is that even though they (and the chaos they represent) are troublesome and it seems easier and more prudent to avoid them; this strategy is an epic fail.

Change is the only constant in life. It is inevitable, inexorable and essential.

And of course, change always bring some level of disruption/chaos. Whenever it is possible to lean into the discomfort earlier in the process, rather than trying to control it, resit it, or fix it, I highly recommend trying this seemingly counterintuitive strategy.

But I did get to practice saying yes to the gifts of Chaos, embracing the Mystery of having no idea what was next and dancing with what was happening. Not every minute, but I did the best I could!

Posted by Michelle Simonson at 11:21 AM No comments: