The Little Squid on the Prairie

The Little Squid on the Prairie

In the last episode,  "Why I Love Captain Hook”  I requested that you, my faithful readers, offer suggestions for your favorite villainess, which I promised to work into this installment.

The only suggestions I received were Nellie Oleson from Little House on The Prairie and Ursula the Sea Witch from The Little Mermaid.  I love a challenge! 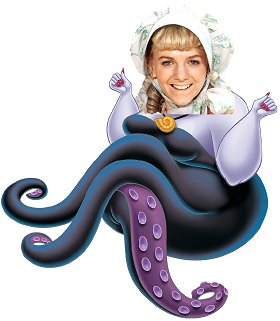 I did not remember Nellie, and was baffled by this choice until I did my homework. She actually rated number one on some lists of best TV villains and was described by the actress who played her as “ …a bitch. A horrible, wretched, scheming, evil, lying, manipulative, selfish brat”.

Just what I was looking for – and a bonus that she is young and cute, as that fits well into my story. Thank you, John Jr, (AKA Cousin Duppy) for the great suggestion!

My friend Jean, who suggested Ursula, explained her choice this way, “She stole Ariel’s voice and her man. A woman betraying another woman is up there on the list for me.”

Perfect! Not only a great fit for my story (except for the fact that my "Ursula " inadvertently helped me find my lost voice), but a nice tie-in to  “The Mermaid’s Secret”  post, plus, as fate would have it, Ursula is one of my personal favorite villainesses of all time.  So here is this month’s story with a mash-up bad girl: Nellie the Sea Witch.*

After "The Day My Life Changed Forever" (9/11/09), and the following few weeks during which I explored The Mermaid’s Secret, I was beginning to recover. My bleak prospects were improving and the scariest part was over by Halloween.

"By the time I Got to  Phoenix" - (apologies to Glen Campbell) I was well on my way to my new life. After all, where else but Phoenix does one go to rise from the ashes?  The desert was the perfect place to engage in the time-honored tradition of healing in it's purifying sun and heat.

I was extremely fortunate that my recently widowed aunt opened up her brand new house (which she and my father’s brother had spent several years designing as their dream home) to me from November of 2009 through March 2010. I occupied the entire west wing of her enormous North Scottsdale mansion on Lone Mountain. We were both healing from grief and comforted each other, but also respected our mutual needs for privacy.

True to its name, Lone Mountain stood proud and isolated from the world. We had a magnificent view from our lofty peak. There were only five homes on our side of the mountain and they were far enough apart that Aunt Ingrid used her golf cart for visits to the neighbors.

I basked in the luxury of this much needed solitude and grew to love the harsh, prickly beauty of the desert. I used the time to read, research and write, as well as take daily walks in the desert, where I wandered lost much of the time–literally and metaphorically. All of this gave me the opportunity to process my harrowing experience and begin to plan a new life. I was also deeply grateful for the gift of escaping from the frigid Midwestern winter.

So I was feeling quite benevolent and speaking fairly kindly (although not entirely sincerely, but I was working on it) of "the other woman", who had been an unwelcomed catalyst for all of this.

Until I learned that she (who now became in my mind a vile creature again) had moved into my recently vacated home, would be cooking Thanksgiving dinner in MY KITCHEN (somehow worse than sleeping in my bed with my soon-to-be former husband) and sharing that happy holiday with MY BELOVED STEP-CHILDREN and holding MY BEAUTIFUL STEP-GRANDCHILDREN on her lap, while feeding turkey scraps to MY SORELY MISSED DOG!

I was not pleased.

Now it was my turn to morph into a villainess! Do you remember how Maleficent in Sleeping Beauty got ugly when no one set a place for her at the table?

I knew that if I fully expressed my rage, it would make a difficult situation for my step-kids even worse. I did NOT want this to happen.

After some gnashing of teeth and a couple of restless nights thrashing around with nightmares, I realized that, as much as I self-righteously condemned “the evil one” for her transgressions, I had committed all of the same “sins” (at least to some degree) at one time or another in my life.

This left me with no claim to the moral high ground. In fact, upon further reflection, I came to the conclusion that most of the people I knew and loved had also lied, cheated and/or betrayed.

I also knew that if I carried those toxic feelings of blame and resentment with me into my new life, they would weigh me down and prevent me from taking flight to the next part of my journey. And I felt an urgency to let go and move on quickly because I had just turned 50.

Besides, I did not want to be a fire-breathing, embittered ex-wife. This did not fit in–at all– with the rewrite of my story, in which I would play the courageous and lovable heroine. And it felt horrible to feel those toxic feelings of resentment eating me up.

I told myself that I had no choice about who was sitting at my old dining room table, but I did have a choice about how I would show up for the holiday table in Phoenix and in my entire life from that point on.

By Thanksgiving Day, I had found authentic gratitude for the circumstances of my life. I was astounded at how quickly my seeming inability to forgive transformed into genuine love for both the “villain” and “villainess” of my story.

I certainly never would have guessed that within a few months, the mere sight of her name would become a trigger for spontaneous joy. This occurs frequently, because her name happens to be a well-known place near where I now live, so I see it on signs everywhere and rather than this phenomena diminishing with time, it has deepened each time.

I promise, I am not exaggerating this reaction or the gratitude I feel for the role she played in helping shape this new life. Neither am I some kind of beneficent saint. But I AM the heroine of my story.

Granted, I had the luxury of time and a beautiful place and a great support network, which helped. A lot. But, I have heard countless other stories of people with far worse circumstances and much more to forgive, (such as some concentration camp survivors) who were also able to transform their lives.

I have also heard at least as many stories of those who had an abundance of gifts, yet still clung to their bitterness for decades following minor slights and misfortunes, never allowing anyone to forget how they were wronged.

I believe that we all have the power to choose who we want to be and how we want to live our lives, regardless of our circumstances.

I would love to hear from you, if you have had experiences similar to mine. What did you choose and how that is working for you? Please go to the comment section below to share your thoughts or any other feedback you might have for me.

This ends the part of my story about how my old life ended. Next month I move on to my new life!

*DISCLAIMER: Nellie the Sea Witch bears no resemblance, physical or otherwise to the woman whom I needed a villainous character to represent . My former husband's new wife has neither blond curls or tentacles. The only traits in common are Nellie's adorable youth (perhaps I already mentioned that she is half the age of my former husband and the same age as his daughter). And aside from this last catty comment - that my inability to resist repeating speaks more to my residual villainy than hers - I now think of her as a fellow heroine in my story and as a friend in my life.  I look forward to developing more of a friendship in time - assuming she forgives me for this blog!

Posted by Michelle Simonson at 3:30 PM